by scoobysnacker
Well, technically, this also includes Yugoslavia... but shortly I will add another from immediately right afterwards.

I picked up a Yugoslavian CZ 99 a little while back for not much at all, and it's a sturdy, reliable pistol. There are a lot of Sig similarities, but the CZ 99 is a bit thicker, and a bit shorter than the Sig P226 I recently added. All features work as advertised- the ambidextrous decocker/slide release works fine. And despite the trigger being a bit mushy, the gun really is pretty accurate and I've had no failures with it. I'd say the biggest negative is the frame finish- it will come off if you look at it hard. 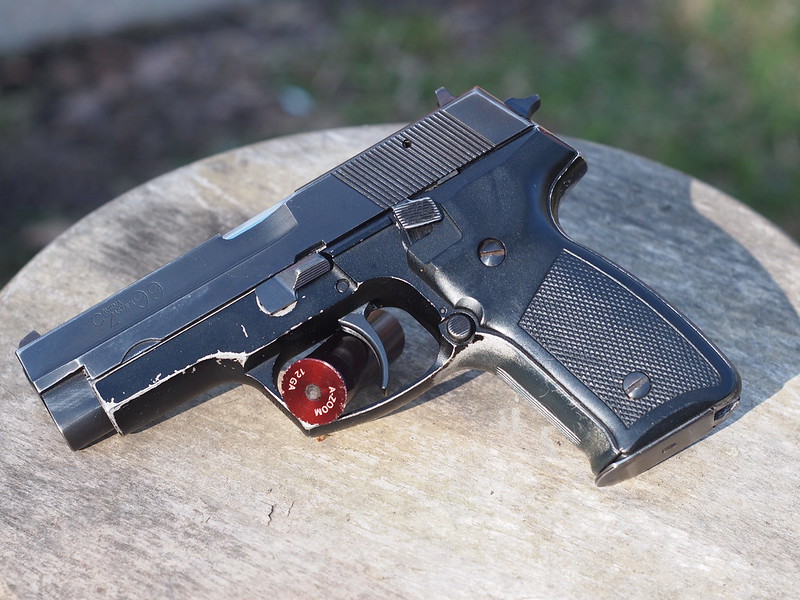 After adding the Sig to the mix, I considered selling it off, but really, I don't have a lot invested in this one (and I really dislike getting rid of any of my guns). So, instead of selling, I decided to make it a matching set- I have a Croatian PHP MV 9 on the way, again for "not much". As I understand it, these two guns faced off in Bosnia, so I thought that for the price involved, they'd make an interesting pair.

I'll post a better pic when it comes, but this is from the seller

by retread12345678
NO EXPERT I got a couple of these when J and G had them I ended up with 2 as a buddy backed out I am not in love
with gun, they are solid and fit my hand well I had one parkerized and it looks presentable Certainly better than the original
finish Those who say I have blasphemed are free to erupt Just makes others more collectible

J&G... you're referring to the PHP? Can you go into a little more detail on your impressions of the guns?

Most of what I've read has been biased, in that it's not a modern "plastic" gun; and some folks say there's spotty QA among the batches. The one I have on the way is supposed to be a "select" from a guy who has about 20, so it should be one of the better versions.

I'm ok with it being a heavy steel pistol, and I'm hoping it's enjoyable as a casual shooter.

retread12345678 wrote: ↑
Fri Jul 14, 2017 2:06 pm
NO EXPERT I got a couple of these when J and G had them I ended up with 2 as a buddy backed out I am not in love
with gun, they are solid and fit my hand well I had one parkerized and it looks presentable Certainly better than the original
finish Those who say I have blasphemed are free to erupt Just makes others more collectible

I for one would love to see a photo of it Parkerized.. And I swear I will not be judgemental

,, I can not promise envious

PhP MV 17 original finish, mint, a select from Todd at Family. He went through the entire batch at SOG and found about 5 - 8 mint pistols with the long barrel. Never fired by me. Just too nice. This is one Todd wishes he never sold due to condition.

by scoobysnacker
72 usmc, that is a nice looking pistol. The long barrel guns are neat.

Ok, I went to sign for it and got hit with the delay again, it's basically expected that I wait 3 days after filling out forms. Probably 3/4 of the time.

(I had won this and the Beretta 92S within 12 hrs of each other, and had hoped/intended to just do both on the same background check... but this seller took a few days to get shipping lined up. Won't go there much, other than neutrally state that he did charge more for shipping than the other party... oh well). Hopefully we get it released before the weekend.

But I did get to examine it, and it's interesting. Gun is dirty and a couple scratches on the grip, but overall it looks in very good shape. I was kind of surprised at how small the case is. It does have the manual, cleaning rod, extra mag, and oil bottle.

Slide stays back on empty mag, but releases when you drop the mag. edited to add: I see it isn't supposed to release, maybe I bumped the release. I'll look at it more when it comes home with me.
And when I say "dirty", I mean it smells like it was lubed with old used lawnmower oil

The first pistol in the picture is a Zastava CZ 99. Mine is marked Yugoslavia, but Zastava is located in persent-day Serbia, and the guns made after the breakup are marked Serbia.

That was the motivation for the PHP to be created- the Croatians found themselves without an established arms manufacturer.

That probably created some confusion...

So while I wait for my release- any input on how the PHP shoots?

by scoobysnacker
It came home today, and I have to say: what a marvelously bizarre little creature it is! The gun has to be basically 95% or better, there is one small mark on the side of the frame, where the trigger bar rubbed it. Otherwise I'd say LNIB. I cleaned it down and reassembled it (and thankfully there are youtube videos showing how to do that, it's a weird process). Has a brownish, almost coffee color to it. The light brown areas, like on the barrel, are not rust, but just look like the color didn't take as deeply. 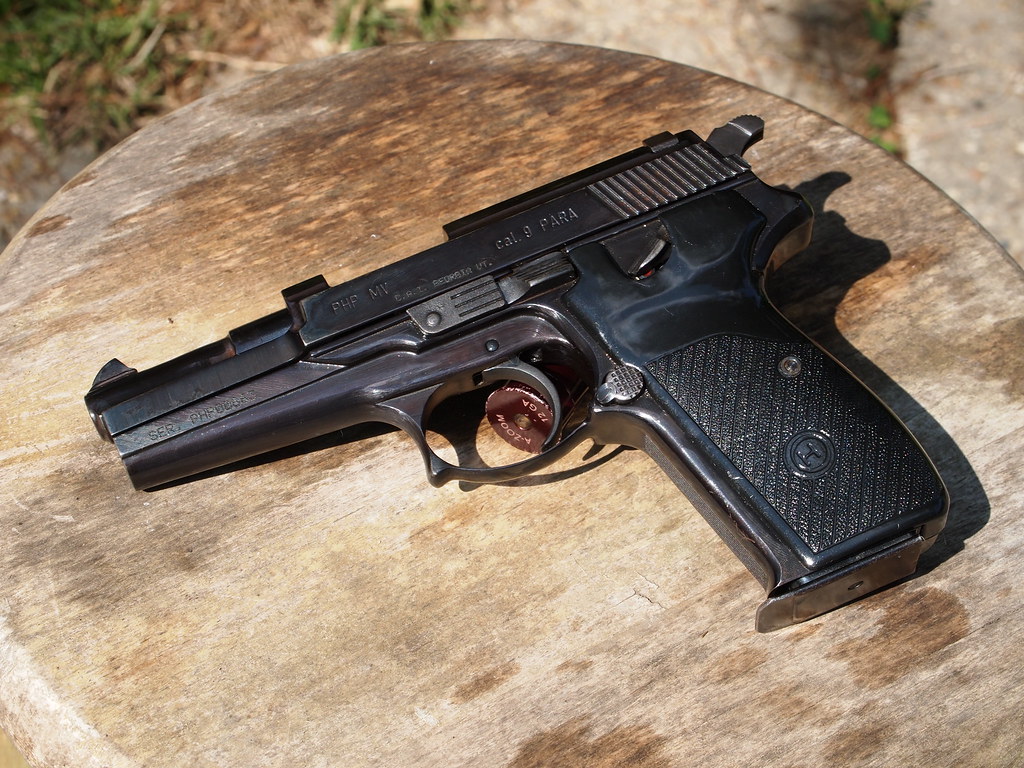 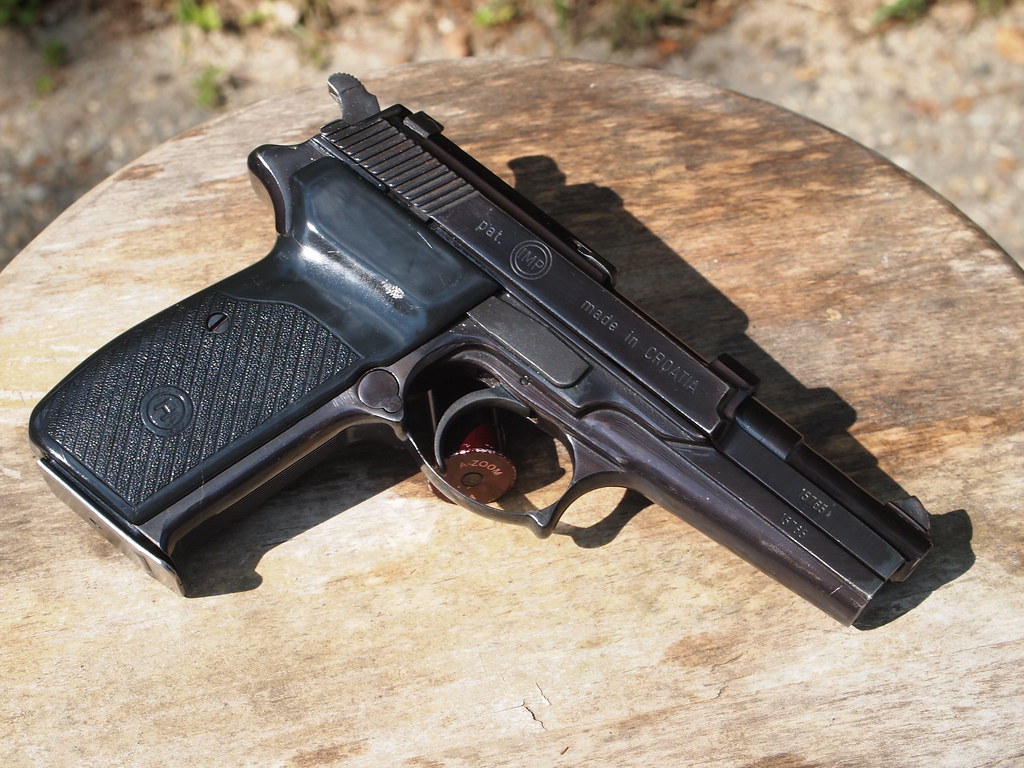 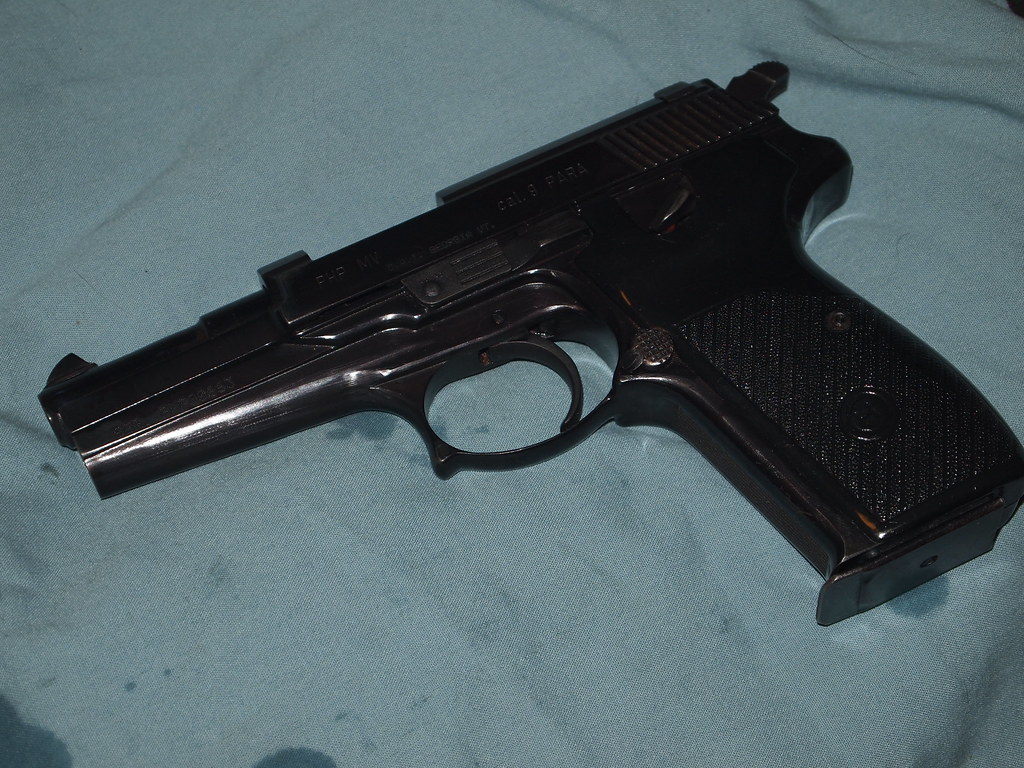 *added*- a quick examination shows a completely different gun than the first one I posted.
I called the seller after winning the auction, and he was pretty happy to talk about the guns, he said he had a few of these. After talking awhile, he told me he'd look through the batch and pick out a nice one.

by scoobysnacker
Just a brief update on the PHP MV9- I did a range trip the other day with it, and I am very, very pleased overall with it. It put some ragged holes in the bullseye when I did my part. No failures in about 70 rds of S&B 115 gr FMJ.

I checked another board for info, and I seem to have one of the highest serials, (highest one listed that I could find), making it one of the last ones made, as far as I can tell. There have been some improvements over the initial design, particularly with breakdown. I don't need to do the dance with the spring, there are grooves in the slide so that the slide lifts off. In a nutshell- lock slide back, turn the lever, bring slide back to battery, lower trigger, move slide forward about an inch, rotate the slide off from the rear.

by indy1919a4
Wow those are such exotic looking guns... Almost like something from Man from UNCLE

Yeah, the weirdness is definitely an appeal. I would have liked to have found one with the 5 inch barrel, those sort of look like Star Wars blasters. But I understand those were mostly early makes, and the later ones were better. Either way, it's neat to shoot a "what is THAT you have" gun, and satisfying to know it's accurate to boot.

by Haris122
When I first got into shopping for a handgun I badly wanted one of the CZ-99's. They sounded perfect for what I wanted. Pretty cheap, yet reliable, and lefty friendly (since I'm a lefty). First I got me a EZ-9 off of another forum's for sale section. I got used to how it handled and everything, but from the get-go the thing was definitely not reliable. Would function reliably with only a few types of ammo. Eventually it even started jacking up with the stuff it used to work fine with, and at that point I started getting real tired of it. I got me a cheap ruger, and realized how much better things could be. This then led me to look into picking up a CZ-99 off of gunbroker, figuring maybe I just got unlucky and got a rare lemon. There I ended up winning the bid on a well used CZ-99 that had some pitting and worn finish. Took it out a few times, and it functioned much better for the most part, but eventually I started realizing that it failed to fire NATO style ammo consistently. Was real bad with some types. Eventually I tried some steel cased Winchester out of it, and then realized it too, was shit. Took me a bit of back and forth getting the guy to take back the gun, but eventually it worked out. I had not lost complete hope finding another truly functioning one, but that seller was the only one at the time, selling them reasonably priced, so I gave up on it and got me a S&W MP 2.0. Very satisfied with that purchase. I might look into getting a truly functioning one eventually again, but not high on my list of priorities right now. Such a shame cause I got good with shooting them when they worked, and again, they were one of the few cheap options that had the slide release and mag change button on both sides, so a lefty can use it well too.
All times are UTC-04:00
Page 1 of 1
Powered by phpBB® Forum Software © phpBB Limited
https://www.phpbb.com/