by Greasemonkey
Looked like a empty thread that needed something in it..

A while ago I was lucky enough to run across this and actually drag it home, and it was only the second one I've ever seen in the wild.

Even though it's a $129 sporterized model from the mid 50's, it's still a Johnson. It was designed by Melvin Johnson, a Marine, and it was used by Marines in the Pacific. Many of who preferred the design over the M1 Garand. To give a number on production, there was well over 6 million M1 Garands were made. The original order was for 70,000 M1941s, but in the end there were approximately 21,400 M1941s produced. Many of which served in the Pacific during WWII, even the invasion of Iwo Jima.

The barrel is easily removable for a compact size, such as for paratrooper use, and it can be reassembled in just a few seconds. Also Johnson assisted Stoner in the design of the AR, the bolt of this is very close to the locking action and bolt on an AR. It uses standard M1903 strippers to load 10 rounds in a rotary magazine, so the need for the enblocs was gone. You could also load 1 round, 2 rounds 5 rounds or what ever instead of 8 or nothing. The weight and size while comparable to the M1, the Johnson design produced less felt recoil than a Garand as it absorbed some of the recoil in the action, when fired the barrel will move backwards about 5/8s of an inch(which was an issue if you fixed bayonets).

Winfield was a big sporterizer of the Johnson in the early mid 50's when the remaining rifles after WWII got surplused, a .270 and 7mm sporter model was also available, as was a scoped model. This rifle has the 6 groove aftermarket Johnson manufactured barrel installed. I guess in the end, being a hunter with 10rds of semi auto .30-06, in the woods, Bambi had a good reason to fear it.

And for the AR lovers..... all of this should look vaguely familiar. Kind of shows the influence he had during the design of the AR. Also, the bolt does rotate slightly when fired. Now this rifle was designed in 1939, and all you need is a bullet or a pointy stick to pull it down. The Johnson light machine gun used the same style design, and was fed from a box mag.

Winfield Sporters ad from way back in the day

by Hammerdown
Nice rifle. Its a shame they sporterized one of the rarer models used in WW2.

by M14man
Nice rifle...but I take exception to the statement on the Garand of loading,"8 or nothing". You can load any amount if you know what you are doing.

by nmcollektor
Very nice - never seen this version, and the original ad is a cool addition to your post.

by neolithic1
Sure in great shape. That's a good find.

by Roy mcleod
I, have a very nice one in my collection,But i, fell bad, that many were made into sporters!!
Roy

by Longshot_34
Outstanding!! As soon as I can I'll post pics of my Winfield sporter 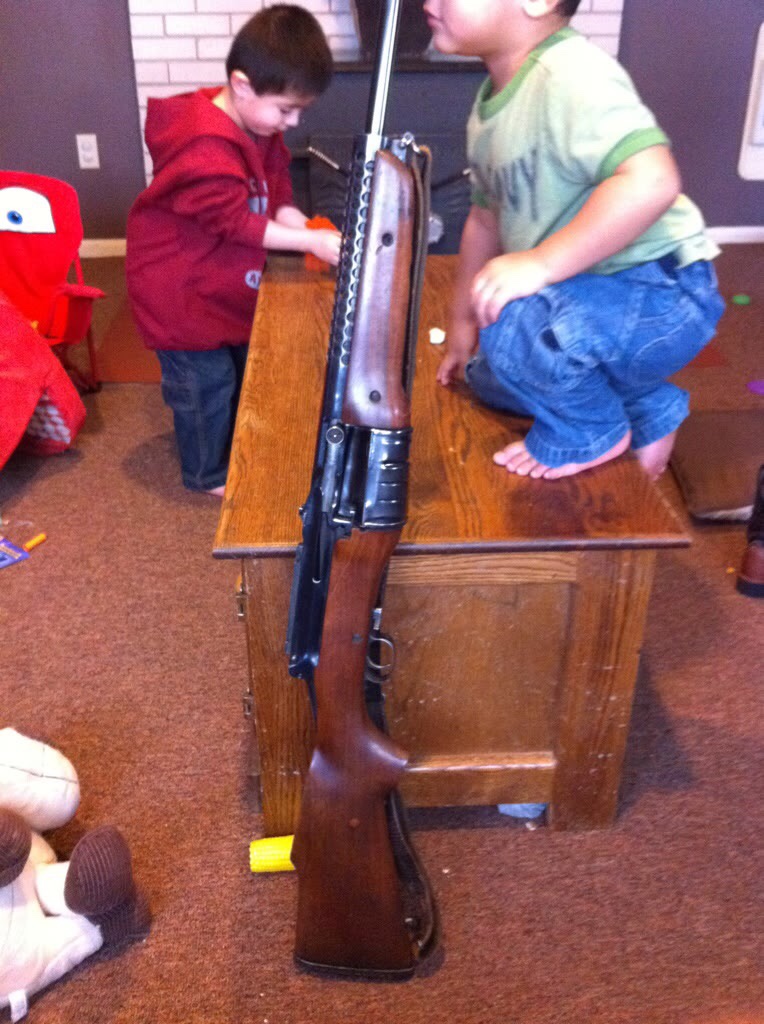 Looks like the only pic I have is pretty junky.

I, have posted photos on my 1941 Johnson Winfield Sporter.
As on examining it, I, noticed,mine has the large rear Johnson military sight assy.
All others, posted, have the small custom rear sight assy.
Comments plz;
Roy

by Longshot_34
I don't know how yours got away with the original rear sight but I like it!!

by Roy mcleod
longshot_34
Thanks!!
I, knew. I, needed to post some side view photos.
Roy